A love for the craft

A philosophy that transcends mere functionality.

Pick up a mug of tea and stop for a moment. It’s one of the most basic, functional items. It’s a vessel that has been unchanged for hundreds of thousands of years. Handle. Lip. Cylindrical container. Once, they were made from baked mud, sculpted and shaped by hand. Today, the chances are, they are mass-produced in some distant factory, churned out on conveyor belts and decorated by robots. But when you pick up a mug that is handmade, you will feel something different. It might be the subtlest of things. An unconscious sense of minute deviation from the norm. Somewhere in that mug, there will be a fingerprint – both real and metaphorical – and somewhere in your mind, your sense of touch will pick it up.

In spite of that introduction, there is nothing pretentious about Leach Pottery – handmade crockery whose very name, ‘Standard Ware’ is understated, and whose functional forms are not so very far from those of their ancient earthen ancestors. The St Ives pottery studio has been around for nearly 100 years, and for appreciators of ceramic craft and handmade pottery, it is both a touchstone and a benchmark – not to mention its vintage pieces holding their value to an impressive extent. To understand why this small studio had such an influence around the world, you need to dip into its history.

Back in the ‘20s, when St Ives was in its heyday as an artists’ colony, a young potter and his wife arrived. That man was Bernard Leach, and he has become known as the ‘father of studio pottery’. He had been brought up in Hong Kong and Japan, had studied etching at Slade School of Art in London. Returning to Japan to practice as an artist and teach etching, Bernard had become intrigued by ceramics. He learned about the traditional Japanese way of firing, known as raku – the objects are fired until they are red hot, then removed and placed in combustible materials to create chemical changes in the clay which impact its colour under the glaze. Having learned the techniques of brushwork and throwing, Bernard lived in Japan and spent time in China and Korea before returning to the UK – replete with knowledge of Asian ceramic firing and designs. 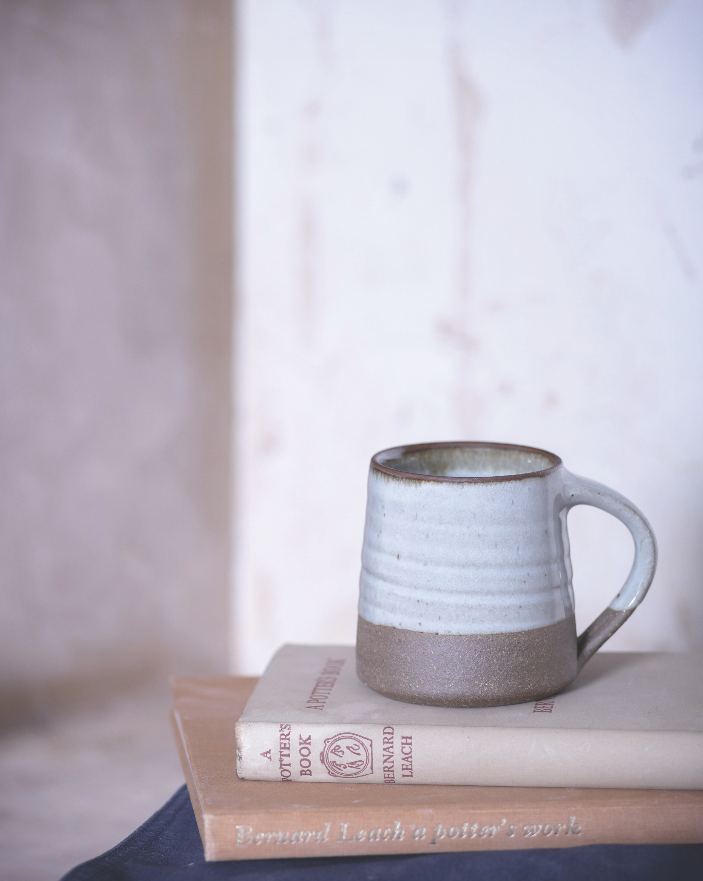 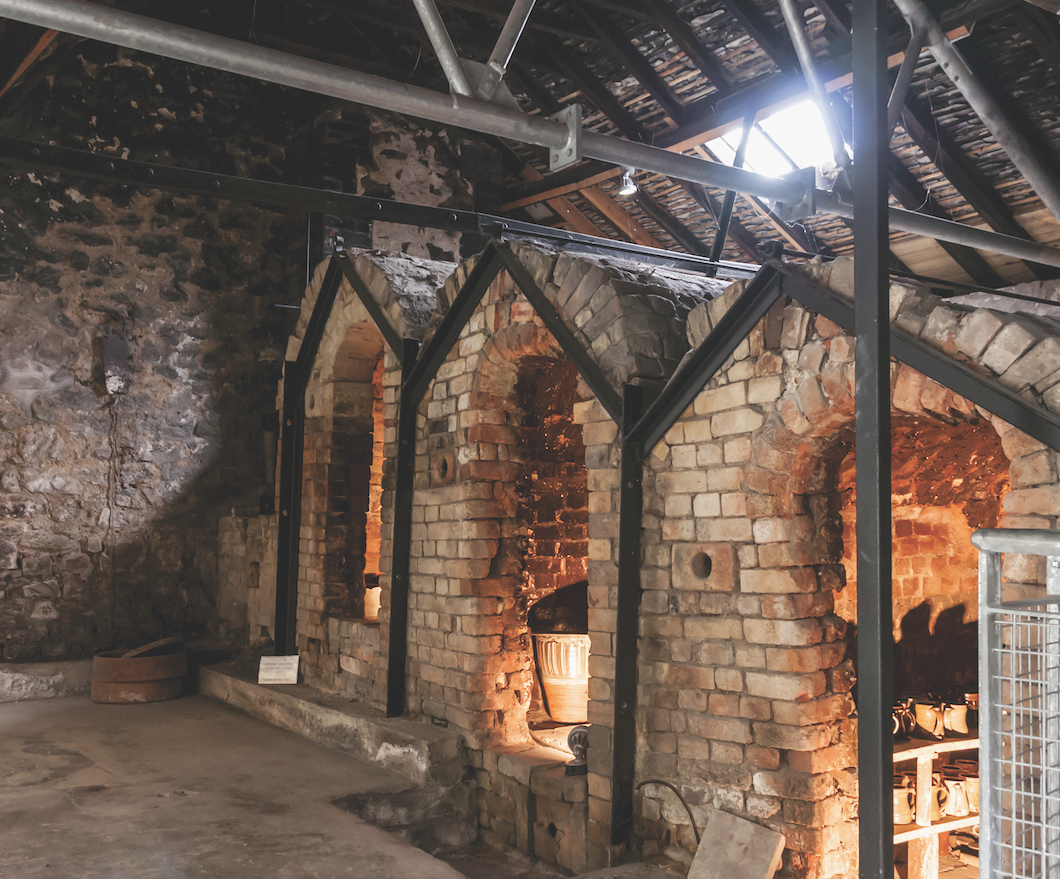 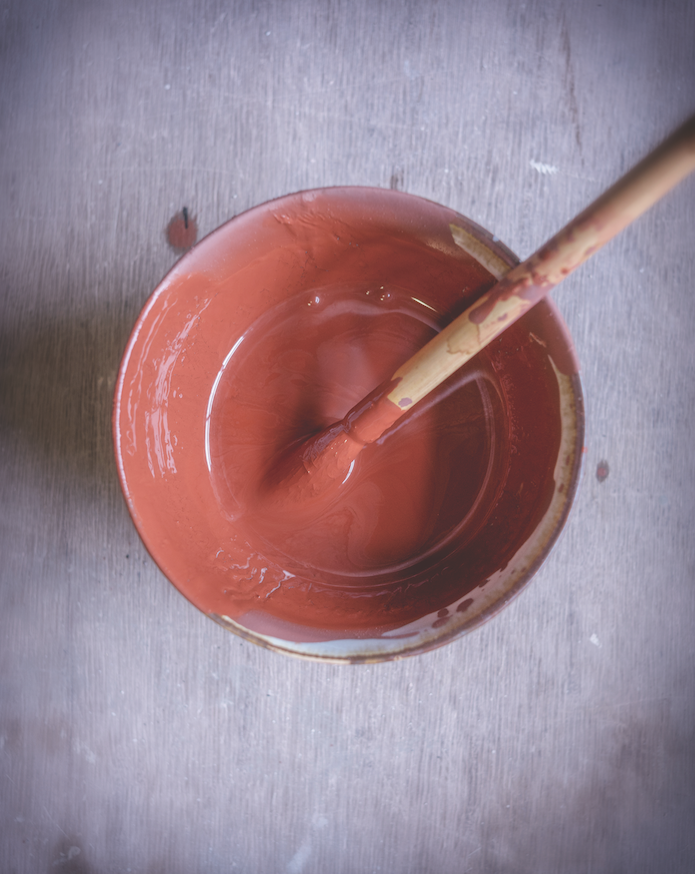 It is this influence that remains a fundamental part of The Leach Pottery today. To the untrained eye, the forms of the crockery might look simple and in many ways traditionally English, but, explains Lead Potter Roelof Uys, they retain elements of Far Eastern influences. “What Leach was trying to do,” he says, “is merge Eastern and Western aesthetics. He had these traditional pots that were very English in their shape and form, but used Eastern methods – which was way more advanced than our Western techniques for making ceramics.”

In the early days, those techniques involved much trial and error – low-temperature raku made an appearance, as did the high temperature firing techniques, which remain at the heart of The Leach Pottery today. Leach and various visiting luminaries from Japan built wood-fired kilns in the Japanese style. The final iteration of the kilns are still on show in the Leach museum. A series of three stone kilns built on a slope, they are sheltered under the roof of what was once an old dairy. “In Japan, they have these ‘downdraft’ kilns going up hillsides,” says Roelof, “12 or 18 chambers. They could achieve much higher temperatures than European kilns. The flame comes in to the bottom chamber, its heat is pulled over the ware and down into the next chamber, which keeps the heat in the kiln longer. Most kilns just had the fire underneath – a big chimney and the heat goes out of the top.”

Wood, though, was not the easiest fuel to source in relatively barren west Cornwall, so it wasn’t long before Leach turned to oil and electricity in the late ‘30s. Today, the working pottery uses electricity for a smaller kiln, and the bigger kilns are fired by gas. The contrast between the old pottery and the current working environment is not as marked as you might think. In the end, the same activity is going on – and it is very much an unchanging, manual process. True, the potters no longer have to mix the clays themselves, but they still have to ‘pug’ the clay, which involves squeezing out clay sausages. The old dough mixers and mangle-like pug machines lie unused, but apparently would still function “if greased up a bit”. The potter’s wheels are electric, not pedal powered. But the action is the same, as is the philosophy.

You wouldn’t think that there is a philosophy behind something as basic as crockery. But the concept behind Leach is not just aesthetic – blending the styles of West and East – but about the nature of studio pottery itself. Studio pottery, says Roelof, was as much about a lifestyle as about the production itself. It was a way for craftspeople to work collaboratively towards the common goal of living an independent life by selling their wares. This fitted well with the bohemian vibe in St Ives at the time, where artists were flourishing thanks to the ease of finding studio space and the supportive artistic community. Even as recently as the 90s, says Roelof, there was still a feeling that artists could support themselves while living and working in the town. While St Ives has now become prohibitively expensive, he sees the collaborative world of art continuing in Cornwall. With shared art spaces and mixed studios like Krowji in Redruth and Cast in Helston, the art scene is simply shifting to cheaper locales.

Roelof Uys, who has been Lead Potter at Leach Studio for six years, is touchingly humble about his achievement, heading up one of the world’s most renowned ceramics studios. Yet he has every credential to lead the studio – he’s embodied the philosophy of the studio for all of his working life, and is deeply motivated by a desire to pass on his extensive knowledge to others. It was perhaps this drive, along with a carefully considered business plan, that led the Leach to give him the influential role. Since joining, he has worked with the management to change a great deal about the practice of the studio – in many ways returning it to its original, highly functional, working production system.

Roelof’s background in ceramics is rooted in his home of South Africa. Like Bernard Leach, he was initially drawn to printmaking, etching and painting. Having left school and begun work as an apprentice in a print factory, he decided that he was more inspired by film making and enrolled in art school. It was there that he discovered what became his lifelong passion: working with clay. Also like Leach’s eye-opening experience with raku in Japan, Roelof was initially drawn by the firing process: “I wasn’t that taken with it at first,” he remembers, “until we did some pit firings. We put a pile of pots in a hole and made a big fire on the top of it. I really like making fires, so I got into it that way,” he grins. He was lucky enough to have some inspiring teachers, he says, who taught him about Leach Pottery, Eastern and Western techniques, as well as the almost undocumented 40,000-year history of African art: “I think a lot of South African artists have a duality,” he muses, “the classic Western training, but also the African history.” 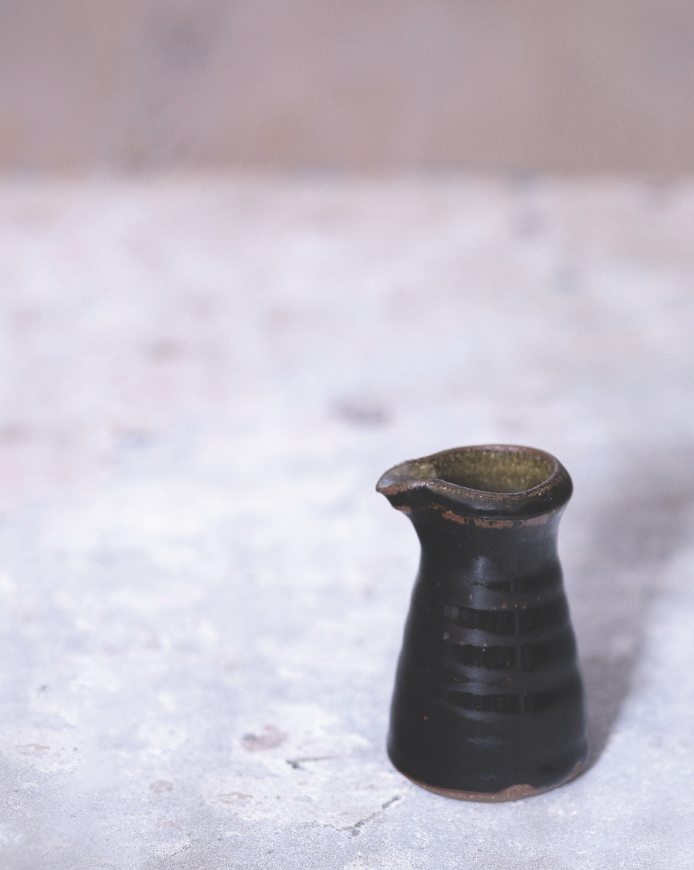 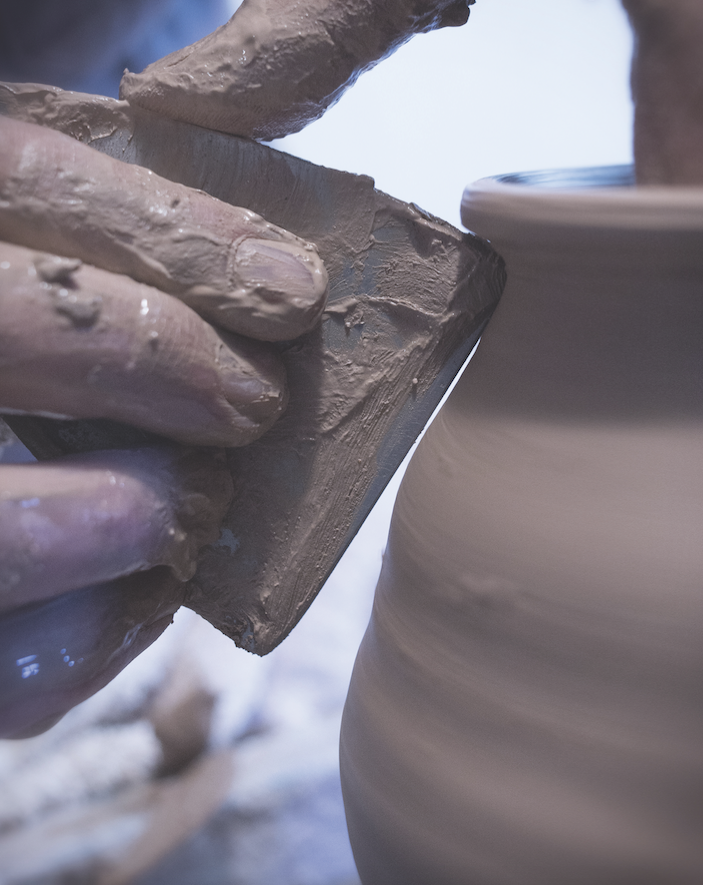 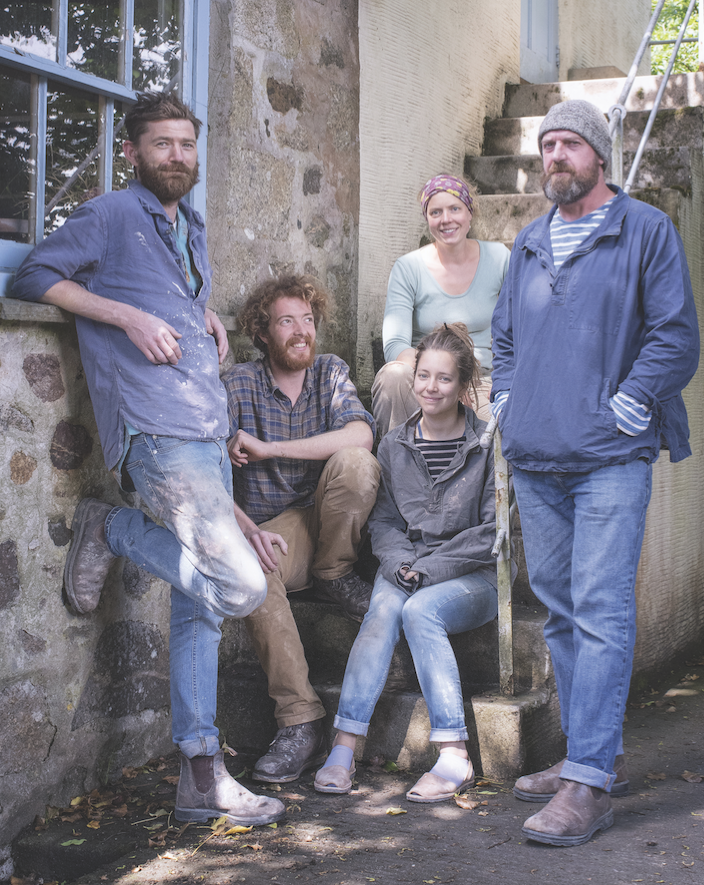 As a practical man, Roelof was attracted to the lifestyle of potters seeking to be financially independent – being able to make their craft and live as they liked. “I didn’t know much about ceramics history and I didn’t really have roots in what I was doing, or what I wanted to do - I was just experimenting on my own. I first encountered that Leach tradition with these potters working in Cape Town. I loved the way the way they were working and the community they had. They all worked in their studios by themselves, but they had this camaraderie. You’d expect that people who do the same job would compete against each other, but it wasn’t like that, it was like they were all on this kind of journey. Not just making work, but making a life, making a good life.” He pauses and thinks back to those days in the late 80s: “These guys weren’t waiting for retirement. They were living their lives. I found that very attractive. We had a very rigid society in South Africa – the divisions and categories. But I met these guys who decided to be potters and not be so-called productive members of society. It was a very bohemian lifestyle.”

Roelof’s journey took him to London, where he worked with a fellow potter making garden pots from a greenhouse in north London, but soon ended up in St Ives – drawn by its history “and the surfing”, he adds. Soon, he had his own studio and his wife was selling his work in her gallery in St Ives. And in 2013, the vacancy for Lead Potter at Leach came up. Since he started work there, Roelof worked with the Leach Pottery team to alter its model. Leach already had a gallery, museum and shop, as well as courses: “I felt that if we’re going to make money out of people coming here, we’re going to have to start paying people,” explains Roelof. “We changed that model from a volunteer programme to three-year paid apprenticeships.” He wanted to create a business that was self-sustaining – a proper working pottery. “That’s the most secure way of doing things.”

Leach Pottery Standard Ware is now sold outside of the onsite shop – they are now approached by numerous clients and retailers wanting to sell it elsewhere. Leach’s elevated position in the annals of functional ceramics clearly makes it very desirable. The workshop is currently training one apprentice potter and employs two previously trained apprentices. Roelof says that applicants don’t always have to have a background in ceramics: “It’s almost preferable to train people that don’t have any previous experience.” He likes people to learn on the job, where it is very practically focussed – the other advantage, he says, is that they learn from each other. “Having five or six people around you with various levels of skill, also contributes to their training. It’s almost that they train each other in here.”

There is no doubt that a handmade piece of tableware is a pretty special thing, and there’s a lot more behind a piece of Leach pottery than meets the eye. As Roelof says, they are sneaky artworks – they go into your life as something utilitarian, and then you start living with it. “The more you touch it, the more you absorb it, the decoration, the glaze and the form starts playing a role in your life.”

From the ground up

Going with the flow

The Art of The Senses