The art of artisan

James Strawbridge strives to incorporate sustainable food practices into all elements of his life alongside supporting local artisan businesses.

James has published numerous books to promote artisan kitchen skills and has had TV appearances on shows with an environmental outlook throughout his career.

He has featured in a number of BBC television series, including his debut on It’s Not Easy Being Green in 2006, when he returned home after completing his History degree. The programme followed his family as they attempted to lead a more sustainable lifestyle, during which time James learnt green engineering concepts, animal husbandry, land management and a very hands-on approach to environmental living.

This experience inspired James and his Dad, Dick Strawbridge, to co-write and publish Practical Self-Sufficiency: The Complete Guide to Sustainable Living, which was initially released in 2010 but has recently been updated and re-released for 2020. “We had to re-write vast amounts of Practical Self-Sufficiency because times have changed and there has been a bigger appetite from readers regarding artisan kitchen activities,” says James. “The new version incorporates things that people can do even if they only have a small plot or garden and focuses on how to live 'zero waste' and plastic free.”

Dick is currently enjoying television fame thanks to his documentary series on Channel 4, Escape to the Chateau, which James has made appearances on too. The series follows Dick and his partner Angel Adoree as they trade in their two-bed apartment in Essex for a dilapidated 19th century French chateau and begin a restoration project. Throughout the restoration Dick has incorporated sustainable practises however, this hasn’t been covered in detail by the show yet. So, this year, Dick and James will be revealing the chateau’s sustainable elements on the programme, covering the chateau’s renewable technology and beautiful kitchen garden. 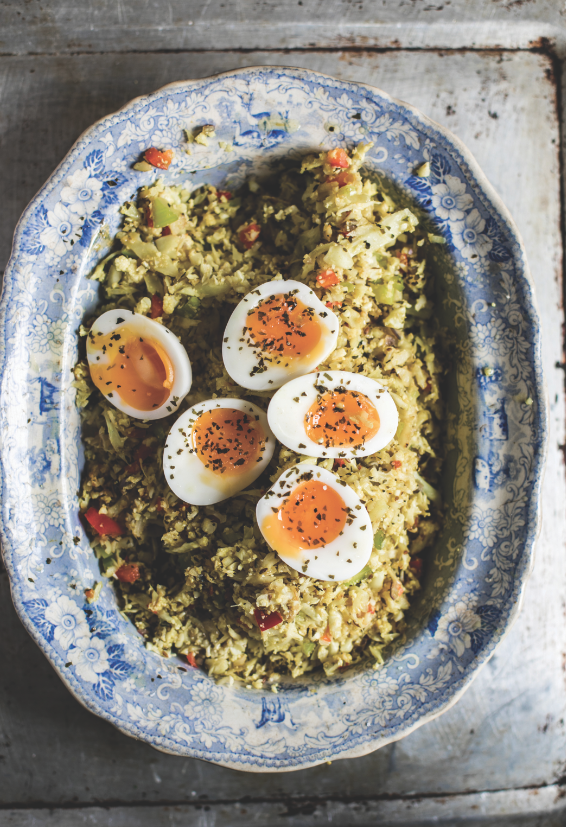 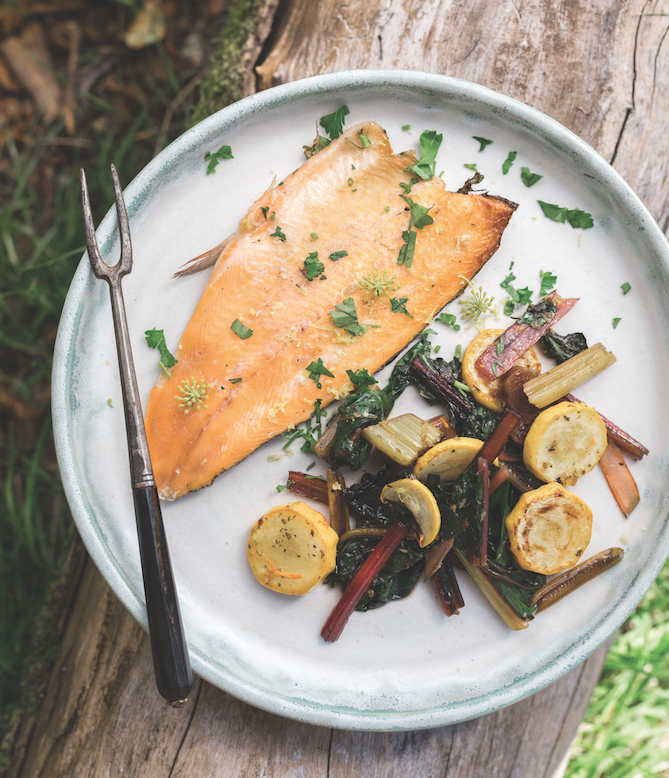 James also presented with his Dad on the popular ITV series The Hungry Sailors in 2012 and 2013, which saw the duo set sail aboard a wooden pilot cutter to explore the food of Britain’s coastal towns. Mooring in tiny harbours and busy ports they met farmers, fishermen, producers and foragers, gathering fantastic local produce and heading back to the galley to cook up a storm. In regards to how his TV appearances have influenced him, James explains: “When we sailed around Cornwall, The Channel Islands and the south coast for The Hungry Sailors show, every single week was fun and positive. The ‘just do it’ attitude that comes across in the show is something that I don’t ever want to forget.” Heading to the source of some of Cornwall’s best produce also left its mark on James and he makes sure to incorporate locally sourced food and drink in his approach, both in terms of business and on a personal level too.

James has written and published various books since the launch of Practical Self - Sufficiency in 2010. Most recently, in spring 2019 he published Smoked Food: A Manual for Home Smoking and he is currently working on another book called The Artisan Kitchen, which will be released in September 2020.

“In an era where people are quite short on time, the motivation behind The Artisan Kitchen is to show how you can easily fit skills into your kitchen life that end up reducing the amount of processed foods that you buy,” says James. “It also provides inspiration on how to minimise waste in the kitchen. One way to do this is to take your leftovers and give them a new lease of life. At the moment I’m sat down writing about potted meats, confit and ways of preserving food using clarified butter so it can sit for three or four months rather than being put in the bin because you think that it’s just a leftover.” There are a lot of eco aspects to the new book, but it’s also about not denying yourself things that you enjoy. The book touches on how your health can benefit if you’re making your own bread and kefir and drinking Kombucha.

“All of these practises tend to come across as a bit hipster and modern,” says James, “but my perspective is that none of it is actually that modern or trendy because they are practises that have been around for hundreds of years and it just happens to be fashionable again now.”

The idea of an ‘artisan’ approach to food has cropped up numerous times during our discussion. But what does artisan mean? “Artisan is about developing a kitchen craft,” James tells me. “Very often we might be used to the convenience of supermarkets and processed foods but artisan champions making food from scratch using traditional knowledge and techniques. There’s also a tendency to use wild yeasts and natural bacteria over commercially produced substances; meaning that there are often health benefits to artisan foods as well. Yesterday I was making a load of butter with my three young kids – something that generationally was standard practise 60 or 70 years ago. I think there are quite a lot of people who, like me, enjoy re-discovering these artisan kitchen skills and finding ways to fit them into a modern lifestyle.” 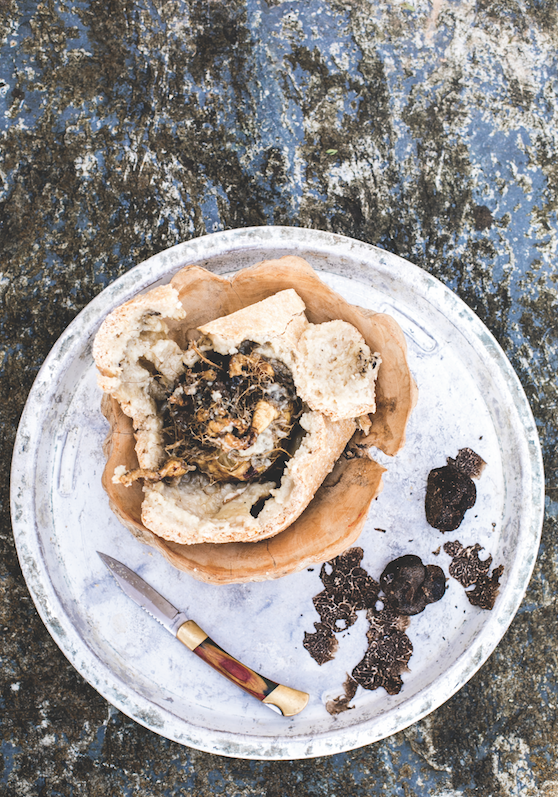 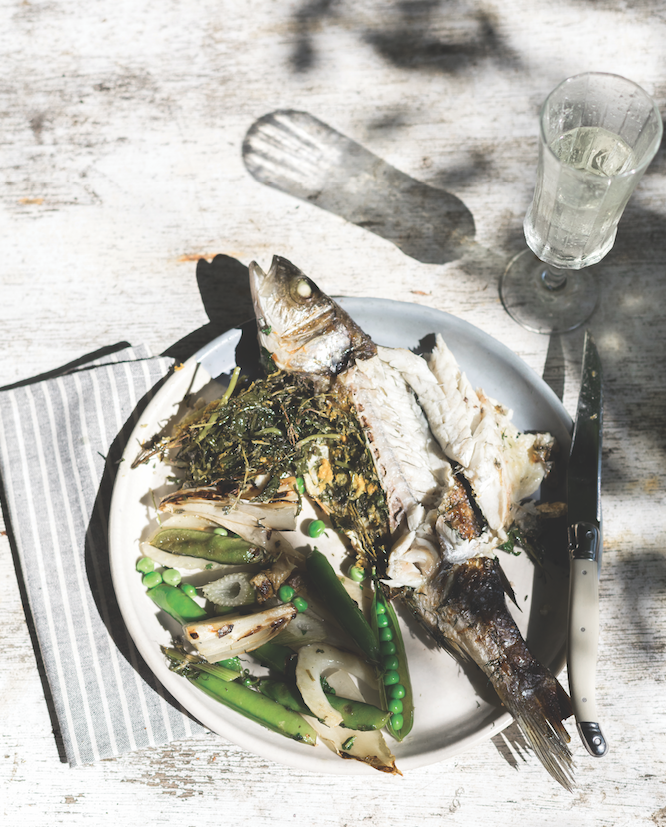 Another aspect of choosing artisan foods is that you’re often supporting local experts. You’ll find certain things that you’ll enjoy doing yourself and if you don’t, there’s the opportunity to look down the road and see someone who’s making an exceptional local beer, or a local cheese made by someone with their own goats, and then you have the chance to support those people. “A lot of artisan food brands start off as hobbies until they turn into big cottage industry businesses and I think that by choosing to use artisan food, you’re saying to that person ‘go for it’, if that’s your dream we’ll support you. Especially when it benefits the environment and your health too, so it’s genuinely a win win for everyone.”

James currently lives in Cornwall with his wife and three young children. As well as working on his books and television career, he is also a business development chef, the skills for which he learnt when he set up his own company – The Posh Pasty Company. This experience allowed him to understand what it’s like to launch a start-up food brand in Cornwall and make a success of it within the national and international market. Subsequently James has decided to take this knowledge and use it to help local food and drink businesses to develop their brand. “At the moment I’m working with various Cornish food and drink businesses, helping them to develop new products for retail but also showing consumers how they can enjoy their products. For example, with Cornish Sea Salt, I produce a quarterly magazine called Seasons where we feature recipes for curing, seasoning and salt baking, showing consumers how to incorporate that ingredient into food and drink. I get a real buzz when I’m working with manufacturers and producers and the thing I love the most is to show people at home how to improve their cooking by understanding ingredients better.”

When he’s not writing books and helping Cornish businesses to market their products, James enjoys spending his spare time with his family exploring south Cornwall’s hidden beaches and secret coves as well as heading on to the river with Fowey gig rowing club and setting out to sea a few times a week. “Making the transition from a business owner to a business development chef has allowed me to spend more time with my family. Part of the reason I chose to become a business development chef is because the working hours mean I’m around in the evenings more,” says James. “And my children are all useful young chefs so we enjoy cooking together at home.

My home development kitchen and office is a place that my children are able to be a part of, they can see me experimenting and making food – I feel like it’s part of their education having me around which is amazing.”

In terms of what the future holds for James, he has a busy year ahead working with his Dad on Escape to the Chateau as well as releasing The Artisan Kitchen and another book. Not to mention his new business consultancy firm. “What’s really exciting for the next year is starting the Sons of Thunder Agency. Myself and food photographer, John Hersey, are developing recipes and producing really exciting content for lots of food and drink brands in Cornwall. Sons of Thunder will continue to work with Cornish food brands and help them tell their story to the UK and international food market. I also work quite closely with UK retailers such as Waitrose and Tesco, so I’m looking forward to approaching food and drink businesses and artisan producers to help them scale up into larger sales.”

The food and drink industry in Cornwall is going from strength to strength and the exceptional local produce that’s available is revered throughout the UK. To have someone like James working to market the artisan food and drink businesses here will help to promote the benefits of choosing artisan products over processed foods and encourage consumers to invest in a healthier and more environmentally friendly lifestyle. We look forward to seeing what the future will hold for this eco-conscious and entrepreneurial young chef and how his approach will help to promote the artisan way of life.

Life on the rocks