The cream of the crop

At the Royal Cornwall Show a few years ago, a lady stopped by the Rodda’s stand for a chat. As she left she turned back to the Managing Director, Nicholas (Nick) Rodda, and said sternly: “Remember, you can never sell Rodda’s because it’s not yours to sell. It belongs to us, to Cornwall.”

Proof, if any were needed, that the legendary clotted cream producer has a special place in Cornish hearts. The cream tea is a globally recognised symbol of the Duchy, and for most people it’s only a real Cornish cream tea if the name on the pot is ‘Rodda’s’.

“It was really quite humbling,” Nick says of the lady at the show. As a member of the fifth generation of the family to oversee the Scorrier based business, he marvels at people’s eagerness to report on where in the world they have been served Rodda’s clotted cream. “They write in to tell us that they were served with our cream on an aeroplane in the Far East or at a stately home in Scotland. For them to take the time to do that, Rodda’s must mean something to them.”

The company celebrates its 130th year in 2020, and with turnover of £37m last year and 180 employees, Rodda’s has grown to become one of Cornwall’s largest businesses. Its products – primarily Cornish clotted cream, but also including pouring cream, milk and butter – are sold in supermarkets across the UK and exported to several other countries, including the UAE, Hong Kong and Japan.

Rodda’s is a rarity amongst large businesses in still being 100% family owned. Nick recognises that being born into the family behind such a well-regarded local business is a privilege. But he emphasises that joining the firm was a positive decision, there was no assumption that he would make his career in Rodda’s. “There was never a sense that I would be letting the family down if I chose a different path,” he recalls.

Nevertheless, it was perhaps inevitable that he would be drawn into the business given how closely his life has been intertwined with Rodda’s. He grew up 100 yards from the creamery, which has stood on the same site since 1890, and summer holidays as a teenager were spent working on machines in that building. The turning point came one of those summers when, aged 19 and contemplating going away to study accounting or business, one of the delivery drivers was taken sick. Nick was dropped in at the deep end, taking over the route at the busiest time of the year despite never having done the job before. But he liked it and stayed working on the vans for another year, still intending to go off to university.

That was when his father gave him the option to stay with Rodda’s and start learning the different areas of the business. The next few years were spent working everywhere from production to deliveries, from the lab to the offices, laying the foundations for his career.

“It’s not as simple as just walking in and getting a management job right away because your name’s over the door,” he says. “You come in at factory floor level and you have to learn every job.” That not only allowed him to understand how the overall business ticked, it also gave him a layer of credibility. He recalls a meeting a couple of years ago when one of the company’s drivers said: “Look Nick, you really don’t know what it’s like out on the road.” Another driver who’s been at Rodda’s for 25 years, admonished his colleague, saying: “Actually, that’s not true - he used to do your job!”

After more than 30 years in the company, nobody questions Nick’s credentials these days. He has steered Rodda’s through some critical times, and while the business has been going for 130 years, the pace of change has accelerated dramatically in the last 25. “Businesses evolve and mature just like people,” he points out. “In the early days, we didn’t really have growth aspirations and we just reacted to opportunities. Now we’re more strategic, more focused.”

Naturally, as family members retire from the business, they are succeeded with equally passionate and committed individuals with valuable expertise, weaving modern business practises into the traditional fabric of the creamery.

For all that it has adapted to the changing business landscape, Rodda’s remains a family owned business. That means they can do things a bit differently, the most obvious manifestation of which is the ability to take a longer-term view. Many businesses operate with a time horizon of perhaps three years, but with no outside shareholders to answer to, Rodda’s can take a five to ten year perspective. Profitability still matters of course, but Nick says it’s not the be all and end all. “We have a ‘quadruple bottom line’, which includes people, charity and the environment, as well as profitability.”

Its people are clearly very important to Rodda’s. “We have values, we want people to be honest and straightforward, to care about each other in the business.” In practical terms that means providing healthy options in the canteen - free fruit and milk, for example - as well as bringing people together over annual staff barbeques, to say thank you for a job well done. As for charity, Rodda’s works with a range of non-profit organisations, often donating the ingredients for charity cream teas. They also had a keen eye on environmental issues long before it became fashionable. Nick says: “Efficient use of energy and water has always been a priority. We want to be good custodians of resources.”

That gives Rodda’s a slightly different view of the world. Nick sums it up thus: “When the board sit down it’s not always about how profitable we’re are going to be next year. We also look at how our values are reflected in the business. How are we doing with charitable giving? What about our environmental agenda?” A few years ago, some of this would have been seen as a bit eccentric in the hard-nosed world of business. But now, recognising the value of your people (‘human resources’), engaging with charitable organisations (rebranded as ‘Corporate Social Responsibility’) and environmental awareness have become hot topics at even the largest global corporations. Yet a business in Cornwall has been doing this for years. ‘Doing well by doing good’, you might say. 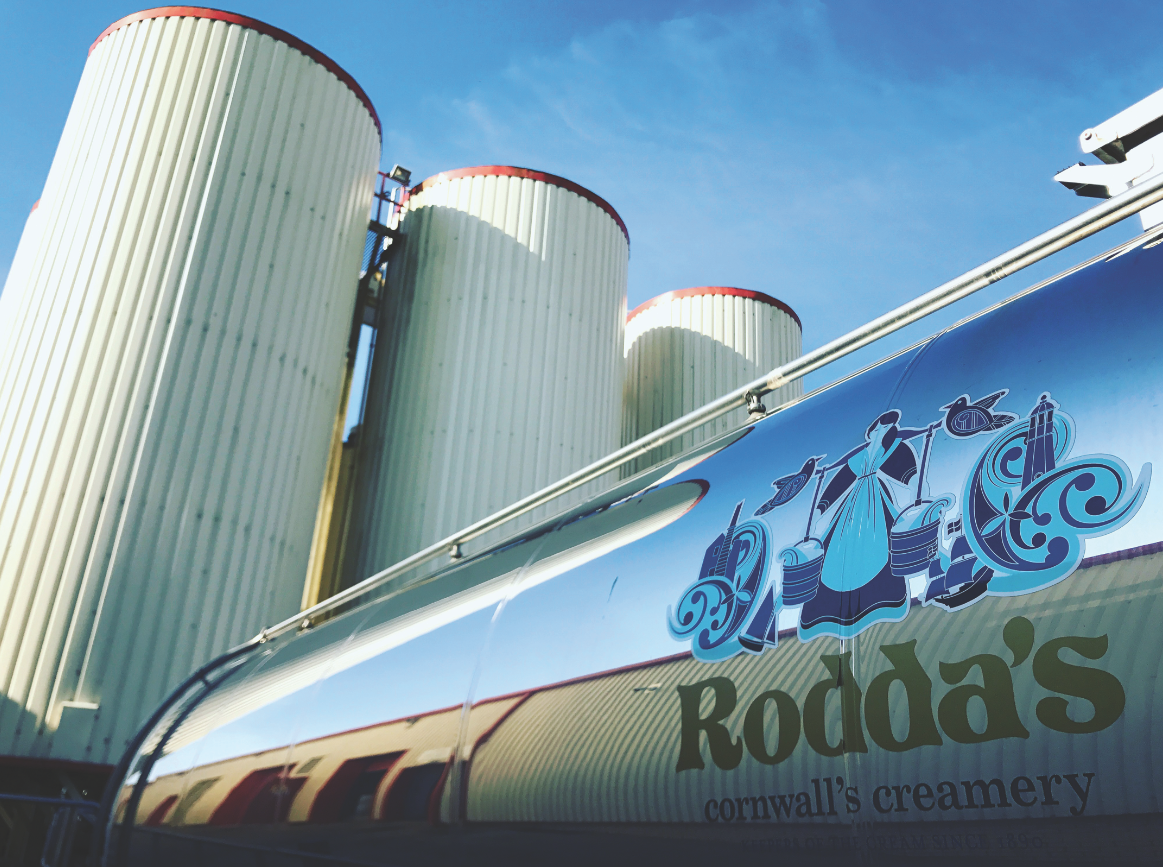 At its heart though, Rodda’s remains a thoroughly Cornish business, manifested through the company’s concern for other local enterprises. Its most important relationship is with the farmers that supply the main raw material – milk.

Several years ago, Rodda’s cut out the middleman and started buying directly from local farmers. They now have 47 milk suppliers within a 30 mile radius of the factory, with a commitment to taking all their output. Meetings are held throughout the year so both sides get to know each other – light years away from the traditional commercial relationship and the ‘like it or lump it’ approach to farmers. Similarly, Rodda’s sources as many of its other raw materials from Cornwall as possible, even if it involves a bit more effort than buying outside the county.

Rodda’s also flies the flag for Cornish business nationally, and Nick is a strong proponent of ‘Brand Cornwall’. He firmly believes that the regional identity is a vital branding tool, especially in the area of food and drink with its emphasis on provenance, but recalls that it wasn’t always the case. “Back in the early 1990s when you told people in London that you were from Cornwall, the joke was ‘So what do you do all day – lean on a gate chewing straw and looking at cows?’ They were very dismissive. It’s very different now.” He’s keenly aware of the risk that the new positive perception of Cornwall could lead to complacency though. “People always have choices so we have to make sure we’re always benchmarking Cornwall against others. We have to back up the brand with the reality.” Nick also has an interesting perspective on one of the key stumbling blocks for Cornwall as a business destination – its perceived isolation from the rest of the country. “Yes, we are a long way from a lot of places but people’s perception of that is greater than the geographic reality. We need to break down those barriers to let people know that we are open for business.”

Rodda’s did just that was when they won the contract to supply cream to British Airways back in the 1980s. BA loved the product, but worried about the practicalities of getting the necessary three deliveries a week from Cornwall. They were assured it would not be an issue, and after 25 years without missing a single delivery to Heathrow, Rodda’s received BA’s ‘Supplier of the Year’ award. “We need more of a can-do attitude within the county,” says Nick.

So with everything going well, what does MD Nick actually do all day? He laughs and says; “I sometimes ask myself the same thing after a busy 12 hour day!” He is clearly still very hands-on, but his key task is to ensure that the business is going in the right direction strategically. In the last 12 months, Rodda’s has strengthened the executive team as part of the ongoing transition of the traditional family business. “The old idea was that the boss should be able to do everything. Now people like me have to identify what they are best suited to doing and what needs to be delegated,” he explains. He is particularly focused in the sales side and customer relations, with a strong interest in how the brand is perceived.

His team is also constantly looking for new ways of promoting clotted cream, away from the traditional cream tea, to take advantage of Britain’s growing culinary curiosity. Whether it’s adding a dollop of cream to a homemade curry or to a chocolate pudding, these secondary uses are a real growth area. And of course, nobody would deny that including a generous spoonful of clotted cream to a dish makes it all just a bit more special.

Of course, the cream tea will always be at the heart of what Rodda’s do and Nick is happy with that. “Whenever you talk about them, it transports people back to their time in Cornwall. A cream tea is a special moment – we’ll never move away from that.” Indeed, as part of the company’s 130-year celebrations in 2020, Rodda’s is sponsoring the Biggest Cream Tea in the World event at the Royal Cornwall Showground in June. This attempt to bring the record home to Cornwall by serving 1,200 cream teas in one go is a huge challenge but all in a good cause.

What of the future? Well Nick will ultimately pass on the stewardship of the business to the 6th generation of Rodda’s, ready for the next 130 years. It’s fitting that from the window of the boardroom we are sitting in, Nick can see the site of the original farmhouse. It’s a reminder of where it all began and of the need to sustain Rodda’s rich heritage. “We have to be respectful of the past but look to the future,” he says. Which, when you think about it, wouldn’t be a bad motto for the company.