Losing sight of the shore

There are few individuals who will literally cross an ocean in a bid to fight for the future, but Louise Tremewan is one of them.

“The ocean means everything to me. It’s the place I go to when I’m happy, it’s also the place I go to when I need time to think and reflect. Being close to the ocean has such a positive impact on my mental health and growing up, I had so many wonderful experiences by the ocean. It’s a place that holds very special memories of good times with family and friends.” 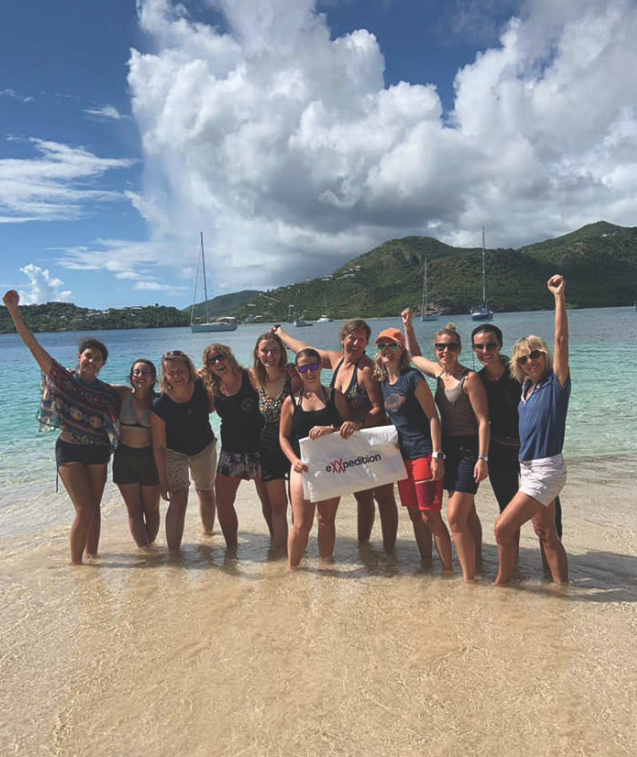 Louise Tremewan is a primary school teacher from Helston. She’s also a stand-up paddleboard instructor, working with Ocean High SUP in Marazion during her spare time, and in fact there are very few times of the year when she can’t be found in, on, or at least by, the water. It’s a passion that, in recent months, has literally taken her around the world. But more on that later.

I think we can all agree that, on a global scale, progress has been relatively slow when it comes to tackling the growing issue of marine pollution, but it’s something that Louise has personally pursued for a number of years. “I became especially interested about five years ago. I was walking along a beach at Praa Sands and I became very aware of the amount of plastic and ghost fishing gear that had been washed up on the shoreline.” From that point on, Louise explains: “I would always do a beach clean-up whenever I visited the ocean. Even if it was just for two minutes!”

As she continued on her personal campaign, Louise’s efforts found a point of focus in her classroom at Marazion School. “As a result, we carried out many beach-cleans with the pupils and local community, as well as engaging with Surfers Against Sewage (SAS) and their education programme.” In fact, Louise explains that Marazion became the third SAS ‘Plastic Free School’ in the whole of the UK. And she didn’t stop there.

“Working with my colleagues at Ocean High SUP, we developed a summer camp for kids, which involved learning to paddleboard, as well as covering the basics of beach safety and marine pollution. The children then joined our weekly club, Ocean Tribe, for regular club paddles, skill development and beach clean-ups.”

In December 2018, Louise saw an advert on Facebook for an organisation called ‘eXXpedition Round the World’. “I had some knowledge of the organisation, and had been to a talk by the founder, Emily Penn. I actually dismissed the adverts the first two or three times that I saw them, thinking that it would be cool but I had no chance of being selected,” explains Louise, modestly true to form. “However, the adverts kept coming and it got me thinking that maybe it was possible. They stated that no sailing experience was necessary – which was great, as I had none!”

Circumnavigating the globe via four ocean gyres and the Arctic, eXXpedition Round the World is a first-of-its-kind, all-female sailing voyage and scientific research mission. Founded by Emily Penn in 2014, the latest voyage started last year and is set to drop anchor for the last time in 2021, covering a total of 38,000 nautical miles, across 30 voyage legs, with a crew of 300 women aboard the S.V. Travel Edge. The course has been plotted to sail through some of the planet’s densest marine plastic accumulation zones, to study the true extent of plastic pollution and the effects it’s having on our oceans, tying together nicely Louise’s love for the water and her interest in marine pollution. As you can guess, Louise inevitably applied, requesting to be part of the Atlantic crossing stage. “It involved sailing through the North Atlantic gyre, an area that I’d covered with the pupils in my class. I also thought it would be an amazing opportunity to sail across an ocean!” After submitting a 60-second video explaining why she’d like to be involved, before being interviewed via Skype by eXXpedition Mission Leader, Sally Earthrowl, Louise finally received an email asking if she’d like to accept a place on board. “I was over the moon!”

Setting sail from Ponta Delgarda in the Azores on Friday 1st November last year, Louise and the rest of the crew covered some 2,274 miles, arriving – incidentally – in Falmouth Harbour, Antigua, on Saturday 16th.

Interested to know more about the voyage, I ask Louise about the role she played. Having read through the blog entries – and caught a few of Louise’s Facebook posts during the course of the trip – I got the impression that there was more to eXXpedition than just the research. “We had three professional sailors with us: Anna, our Skipper; Maggie, our First Mate; and Sophie, our Deckhand. Dr Winnie Courtene Jones, from the University of Plymouth, is the Science Lead for eXXpedition and was our Mission Leader for the voyage.” Along with the rest of what she calls the ‘guest crew’ – of which there were ten – Louise was assigned to one of three ‘watch teams’.

There were specific duties to be completed during each watch, Louise elaborates. “Sailing the boat was obviously a part of it! We each also had a part in preparing meals and keeping the boat clean and organised. Whilst on watch, we had to ensure the log was completed every hour, on the hour. This included information on our location and speed, as well as the weather conditions and anything else that was happening. We all took it in turns at the helm; the professional sailing crew were fantastic teachers, so the novice sailors among us were given plenty of guidance and support.

“Research was a big part of each day,” Louise continues, “consuming a significant amount of time. We collected samples from the surface of the ocean using a piece of equipment known as a ‘manta trawl’ – thrown over the side of the boat and trawled alongside us for 30 minutes, allowing any microplastics at surface level to be collected.” The crew then used a series of sieves to differentiate between the sizes of plastic they found. “Some of these samples were then further tested to determine the type of plastic they were made from. This was done using a Fourier-transform infrared spectrometer,” or, as the crew called it, a ‘magic plastic machine’. “We also collected samples from 25 metres below the surface, using a Niskin bottle. Everything we collected was saved and stored, before being sent to a number of different universities around the globe to be analysed.”

Her journey wasn’t all about the research, however, and when I ask Louise to tell us about her highlights, she reveals how she hadn’t expected to form such amazing bonds with the other women on board. “People said it would happen, but I was a little dubious – it often takes me a while to form significant connections with new people. But I was proved wrong. I feel like I now have 13 new family members!”

As they ploughed through the North Atlantic gyre, the crew also had visits from pods of dolphins, and Louise fondly remembers “the two hours we spent with a minke whale.” She also tells me about the night sky: “We were fortunate enough to have a full moon during our transatlantic crossing, which was incredible. The night sky before the moon rose each night was amazing – the stars were unlike anything I’d ever seen before, even compared to Gunwalloe beach on a clear night!”

But it wasn’t all plain sailing (you’ll have to excuse me for that one), and during the first 36 hours, Louise tells me: “I was so seasick. It completely knocked me out, and all I could do was sit in a corner of the deck feeling rather sorry for myself. Fortunately, I had some very understanding crew mates, who patiently looked after me and promised it would get better. They were right!”

The other low-point for Louise was witnessing the vast amount of plastic in the ocean, first-hand. “It’s something I’m still struggling to comprehend. Obviously, I already know that we have a significant problem with plastic in our oceans; I see it almost daily on our beautiful Cornish beaches, and we witnessed it in large quantities during the outreach work we did in the Azores before we began sailing. However, once we got out on the ocean, it all looked so clear and beautiful. It was unreal – the most incredible blue I have ever seen – and it actually looked as though our research was going to be in vain as there were no obvious signs of plastic.” But on starting their research, Louise assures me that such speculation was quickly quashed. The samples taken by the manta trawl revealed significant quantities of microplastics, which are less than five millimetres in size and therefore impossible to see from the deck. On one particular trawl in the North Atlantic gyre, in fact, she explains how their research revealed “seven times more plastic than fish larvae.” Take a moment to let that sink in.

Other stark revelations included a plastic fork drifting 1,000 miles from the nearest landmass, and large expanses of disused fishing nets. All of these findings are logged along with their locations – information that is then sent onto NASA for a marine litter tracking project. As eXXpedition Round the World continues and more data is processed, more conclusive information will become available, but even on first glance, it’s fair to say that the fight against plastic pollution – which, really, is still finding its feet around the world – is one we are already sorely losing.

The outlook, however, is not entirely bleak, and that organisations such as eXXpedition are out there working towards change; that individuals like Louise are picking up the baton and engaging with the community to champion a brighter future, is a reassuring thought indeed. Looking to the future and as an eXXpedition Ambassador, Louise will continue to spread the word about the project and the wider issue of marine pollution. Engaging with as many people as possible, she will also be talking about the important part eXXpedition is playing in promoting the role of women in STEM. “Despite significant progress, women are still underrepresented in the science, technology, engineering and maths (STEM) sectors. Globally,” Louise continues, “women occupy only 13% of the STEM workforce, including health professionals.

“I want to inspire and educate individuals,” says Louise, summarising her role and goals for the future, “so that they can begin to make informed choices to reduce their plastic footprint.” And as well as visiting local schools and organisations to deliver talks and workshops about her experience, Louise hopes to continue to develop her work with children and young people through her role with Ocean High SUP, “to continue to share with them the physical and mental health benefits of being on or by the ocean, and the things we can do to protect the blue space that so many of us love so much.”

Eating with the seasons